Jason Dufner winning the Zurich Classic of New Orleans this weekend is a great example of finally getting a “monkey of your back.”  Why?  Because since the beginning of the golf season, Dufner had been labeled (by some golf analysts) as  “one of the best golfers who has not won a tournament.”

Dufner became a professional in 2000 and he has come close to winning.  One of the big heartbreaking moments was in August 2011, at the PGA Championship.  It looked like Dufner was going to win his first major because he had a five stroke lead with three holes to play.  Unfortunately for Dufner, Keegan Bradley played magnificently to tie Dufner and force a playoff.  Keegan beat Dufner on the third hole of the sudden-death playoff.

The media also started to focus on the fact that he would often times be leading going into the weekend but not be able to close.  No player wants to be viewed as someone who is not a closer.  This week, in New Orleans, Dufner had the lead on Sunday. The end of the tournament was a nail-biter but Jason won on the second hole of a sudden-death playoff with Ernie Els.  Another “Monkey off his back” — Dufner is a closer.

Now with these type of comments, from the media, you would expect to see some reaction for the player.  But not Jason Dunfer. He is the most laid-back, unemotional guy on tour.  Sure, maybe it would be nice to see a more animated reaction to good shots but his style is actually refreshing.  It is a nice contrast from the players that throw or break their clubs when they are angry or do excessive fist pumping when they make a good shot.

He did smile and raise his arms when he won but no major fist pumping or running around the green for Jason Dufner.  Below is a great cartoon tweeted by Steve Elkington from his website Secret In The Dirt (showing Dufner before and after the win). 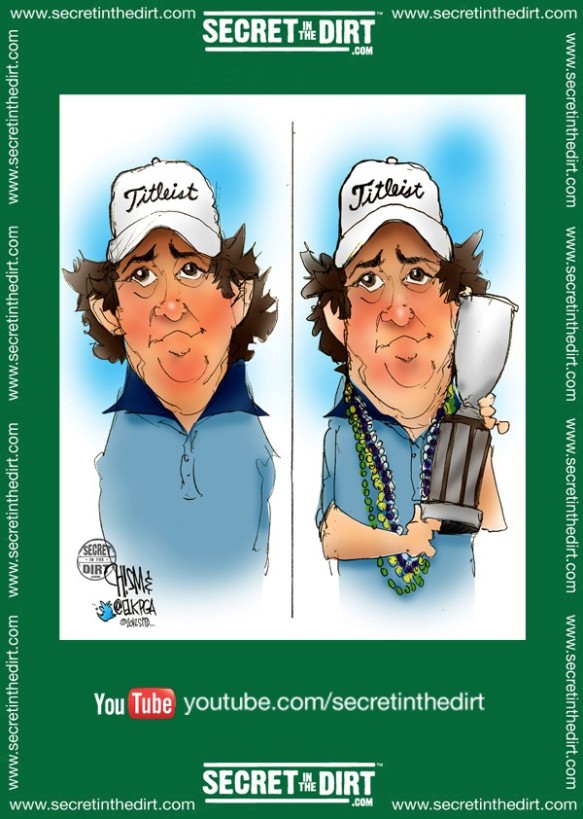 To me this is the greatest form of flattery. You can see more great golf cartoons at the Secret in the Dirt Cartoon Vault.

Let’s hope the quite, mild-manner Jason Dufner has many more great wins in the coming years.  And, although I’m a big fan of Keegan Bradley (after all he is from New England), I’ll be cheering for Dufner to win the 2012 PGA Championship.